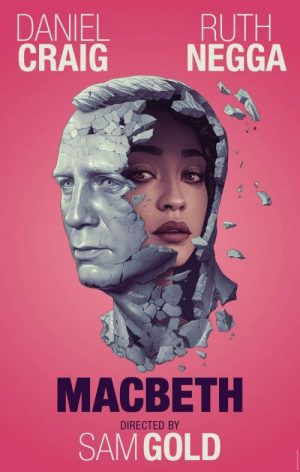 The Corrupting Power of Unchecked Ambition:

The Driving Thrust Behind Macbeth on Broadway 2022, or an Unfortunate Quality of the Structures That Produced It?

While I wouldn’t recommend Sam Gold’s Macbeth as a decent piece of theater, I’m very glad I saw it as I found both what they were trying to do and why they failed to do it unutterably interesting.

With the design they presented a kind of “poor” theater, in fact a program note states, “This production, like the theater of Shakespeare’s time, is one of minimal scenery and maximum fluidity and speed.”  The scenery bit was at least true, but we all knew we were on Broadway and that they’ve got budgets bigger than the GDP, so that was the first irreconcilable inconsistency and obvious leaning into the tides of trend.

The cast of 14 was a varied lot, as is the fashion right now, diverse of race, perceived gender identity and expression, and dis/ability.  Unfortunately the acting was just as diverse (read inconsistent) as the cast itself, and many of the actors clearly did not know what they were saying.  Having some idea of what their budget must have been, I’m baffled as to why they didn’t find a way to get the actors more engaged with the language.  Perhaps they thought that American audiences wouldn’t notice…?

To my mind, much more sinister, egregious and certainly more difficult to articulate was their attempt to create ensemble theater.  Cultivating a true ensemble requires a high quality of listening, honesty, respect and trust as well as time, dedication, rigor.  It requires the development of a shared language, both literal and physical, in which the actors engage while both practising the form in rehearsal, and on stage in performance.  This shared language allows the performers a kind of autonomy to make choices using their own tools as artists, and for this reason I believe it to be a way of creating theater that is less facistic than more traditional methods.  It’s democratic in that everyone involved is allowed to have both a voice and an identity.  Of course, it’s the director who ultimately decides what will be used and what discarded, but making choices about gestures originated by the actors is very different than just telling them what to do.

I percieved that the movement of bodies on stage, black, queer, disabled and otherwise, was dictated by the two white men at the helm, Sam Gold and Sam Pinkleton, respectively.  Not only was it clear that the actors were not listening to each other, but that listening had not been asked of them.  I don’t believe a lot of them knew how.  True ensemble work is grounded in the actors’ ability to listen and make choices with an awareness of the entire group.  As an audience member, I could see them taking their cues – a thing that really should be secret and ideally magical to even the most discerning audiences.  You could almost hear the director saying things like, “When that sound cue begins, everyone go upstage,” instead of creating tools for the actors to integrate the impulses for movement into their bodies and “appear” to be moving naturally.  It is after all, theater, and does involve contrivance to a certain degree.  But if space is not created by the leadership (director, choreographer, etc) for the actors to actually experience the events of the play, all you are left with is contrivance and a hollow attempt at something.

We leave a performances like that feeling unsatisfied but often without knowing why.  It’s because everything has been faked.  Prescribed.  Played at.  Our brains and nervous systems process that experience differently than they do something that is truly risky, alive and fully human.  Instead of our mirror neurons responding to a human being having an authentic experience, we are merely seeing someone pretend to be someone else.  There is no room for the actor.  No room for the entire and uncensored messy human being, and no permission granted them to experience the events through their own bodies, histories and unique backgrounds and cultures.  The work is therefore necessarily both racist and misogynistic, and at its essence anti-human, since its execution denies the existence of its players.

Contrarily, when we do see humans, even those with whom we share little in common, actually able to have an authentic experience in performance, we are literally changed by it.  Our mirror neurons respond to unfaked experiences as though we ourselves are having them.  This process actually creates new neural tracts throughout our brains, and is a direct path to the neuro-physical creation of human compassion and empathy.  Hardly something to be taken lightly.

The contemporary dilemma of well-heeled, dare I say old-school, theater-makers suddenly trying to create non-racist, non-sexist all-inclusive theater inside of structures that are inherently racist, sexist and non-inclusive, is very real.  But I fear the problem will only be solved once the structures themselves are mercilessly burned to the ground and rebuilt accordingly.  Too many people stand to make too much money inside of our existing system to allow that to happen.  Alas.  Thou wouldst be great, Art not without ambition…